Skip to content
We know that Gravitron is celebrating 10 Years, congratulations!
Tell us a bit more about your company, how it got to this point and its involvement in the Film Industry?
“ Thank you, nice to see you at the party. Gravitron was established to provide a full special effects service similar in concept to the best practical effects companies in the US and UK (Asylum, Artem and I.L.M.) where fabrication, engineering and atmospheric effects are combined in one workshop. No other South African company does this. Gravitron had humble beginnings from my garage with very little funding, but over the years we have built a very strong team and invested every cent we earned into equipment and tools. ”
What is your day to day like?
” It depends on the time of year. At the moment I have lots of free time and spend it with my family, I try to stay fit and enjoy life a little. As a company we used this winter to develop some new products (Smoke machines) that we plan to export to Europe. We’re already selling these to our competitors and use them as standard on our sets. It was actually specially developed for a job for The Farm Film Productions where we had a week of night shoots in sensitive locations. We are also implementing a Health and Safety compliance regime with the help of consultants, also a first for any South African Special Effects company. In Commercial Season our lives are the same as everyone else in the business I guess. We work twenty hours a day seven days a week. Quite often we have up to ten shoots in a week, so it can get quite hectic to stay on top of everything. We recently employed a full time resources manager to ensure we do not get overbooked in the season. ”
What is one of the craziest things you have had to quote on or build?
” We have done so many crazy things that it almost feels quite ordinary now. Some of these include crashing a Rolls Royce into a swimming pool ( Farm job ), building a monster truck milk float, making crop circles ( Farm Job), making 20 000 liters of fake gravy with Yorkshire pudding tubes so people can slide into it, dropping a magician in a box with a massive bomb from a helicopter ( Farm Job ). I think we often get approached with jobs that are crazy, and the best part of it is figuring out how to achieve it visually, safely and efficiently. “
How did you get into Atmospheric Effects, Engineering & Fabrication?
” Since childhood I have been curious about making things, and cause and effect. As the 6th of 6 children, I was allowed a fair amount of freedom in this regard, and so had ample opportunity to dismantle, reassemble, burn, blow up and generally explore the world of special effects in its basic form. In my early adults years I gained experience in live entertainment, production, team management, and fabrication, both in South Africa and abroad. It is a combination of all these separate skills that have given me a great foundation for running a multi facetted special effects company. “
What part of your job do you enjoy the most?
” Designing new rigs and then seeing them work for the first time. “ Tell us a bit more about your team at Gravitron?

” We have about 25 regular crew members, some have been with us for almost ten years, making it feel very much like our family. Our crew is our greatest asset, so we do our absolute best to make sure the people who we value stick around. There are various skills and experience sets we make use of that include Industrial Designers, Engineers, Carpenters, Graphic Designers, Welders, Sculptors and Laminators. “ 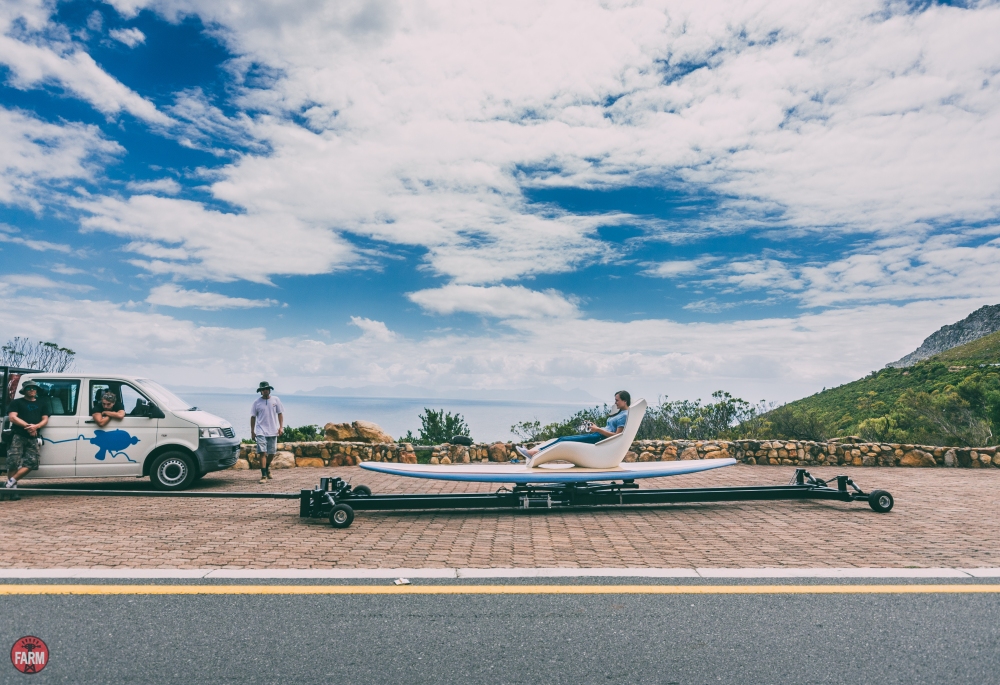 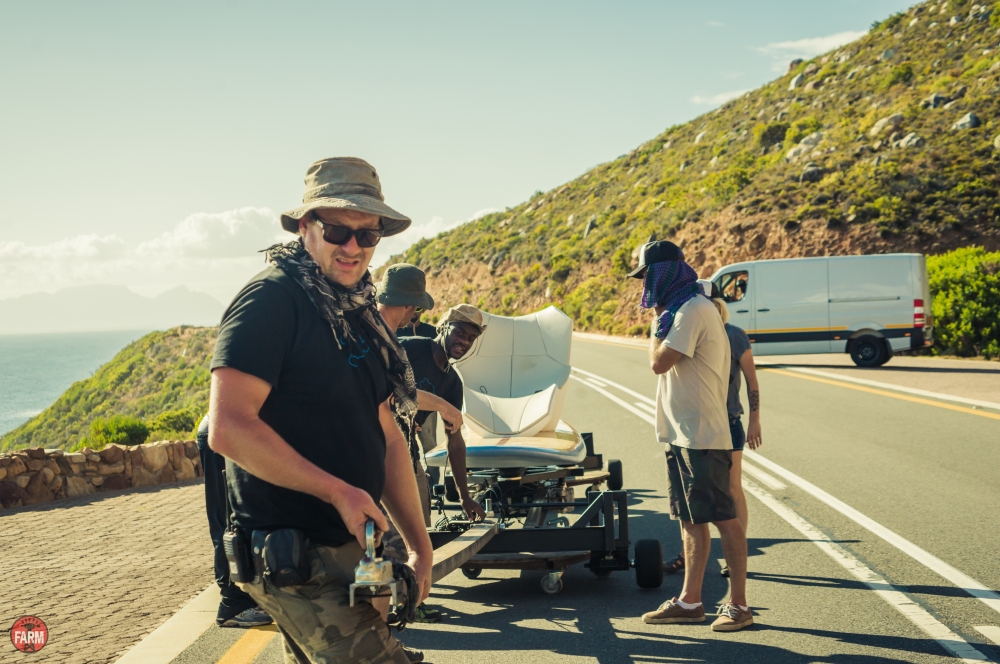 What has been the most amazing / challenging location you have ever worked on?
” There have been many, many beautiful and nightmarish locations of course. Our first week back this year was in the Drakensburg ( Mountainous region in South Africa ) a two day shoot that turned into a week due to bad weather, so there was time for mountain hikes, swimming and drinking beer on the hotel stoep against the backdrop of Cathedral Peak.  The job was a real challenge with very limited budget and only one chance to get the shot, luckily it went really well. What a cool way to ease back into work after the Christmas Holidays. And challenging? Dropping a ton of fish onto the deck of a fishing trawler as fresh catch. This worked well in the morning, but after take 40 the fish were disintegrating with eye balls popping out and getting under the net to reset the quick release with fish guts raining down on me was not fun at the time. “
Tell us a bit about your family?
” Roxane, my wife is a brilliant sculptor with a great business mind and played a huge part in the success of Gravitron. We have two children, Oskar ( 5 years old ) and Iris ( 1 year & 4 months ) that we absolutely adore and will probably spoil rotten. “
Are there particular jobs that you have done with The Farm that stand out to you and why?
” A Lot of the biggest and most challenging jobs we have been involved in was for The Farm. Peter and Skip have had huge trust and faith in our abilities and this played a huge part in our confidence and success. We are very grateful for this. I suppose one worth remembering was a Cadburys commercial in Ghana where we sculpted a giant tribal head on the hotel tennis court in Ghana in a 48h session. ” 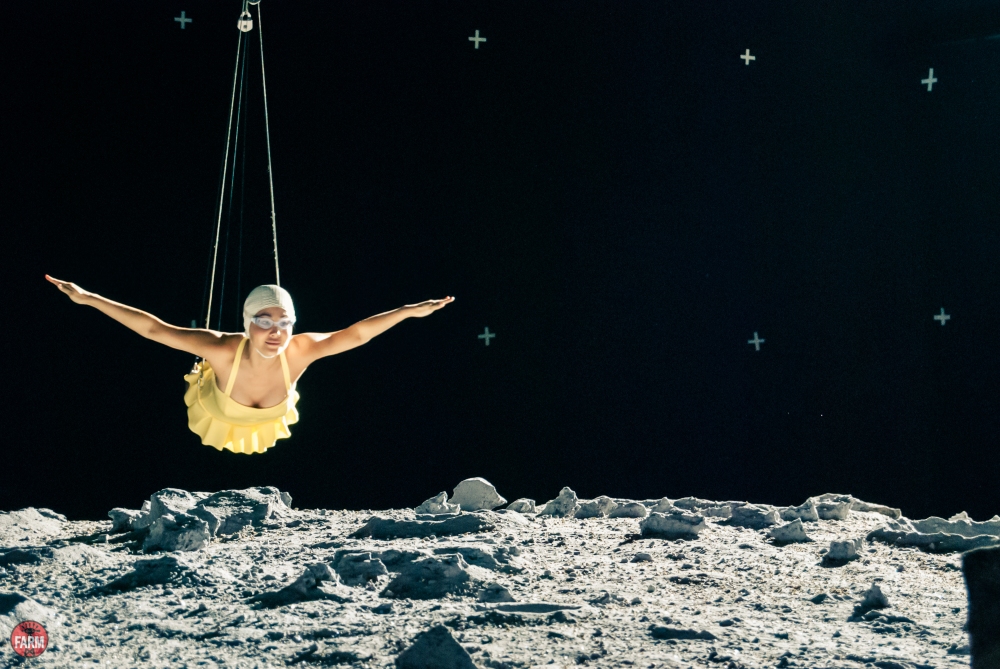 Any memorable moments or stories you have from set that you would like to share?
” Yes, long ago when we were still shooting on film we did a commercial for a cellphone company. A guy throws a pebble that skips on the water all the way around the world until it morphs into a cellphone that lands on a beach. The shot was of the pebble skipping on the surface with the camera tracking along with it ( filmed at Seekoevlei). It was just me and the Focus Puller on the smallest dingy in the world with about 12m of trussing rigged across the top with the camera underslung (no housing) and counterweights on the other end of the truss. I was sitting in front with a fishing rod with a pebble dangling from a line just above the water right in front of the lens. From the front of the dingy there was a single rope that was attached to the biggest and most powerful rubber duck ever built with the rest of the crew on it. No marine support. Just some dude with his huge rubber duck. We did not have proper radio contact, so we just heard action, and the rubber duck launched right out of the water at full speed. The dingy nearly capsized, and the Focus Puller climbed onto the truss to try and balance the camera and passed me the Follow Focus remote. So I puppeteered a pebble and pulled focus at the same time. By the time we came to a standstill the Focus Puller jumped of the dingy and swam back to shore. No more takes as the lens dipped into the water and he was not going back on that rig. But, we got the shot and I was the hero. Hey! “